President Obama has been covering some of the issues he intends to address in the coming year in the build-up to his State of the Union speech. The White House posted a video of President Obama announcing new executive actions that will allow easier local investment, that in the end will provide every American access to 1000Mbps internet speeds. 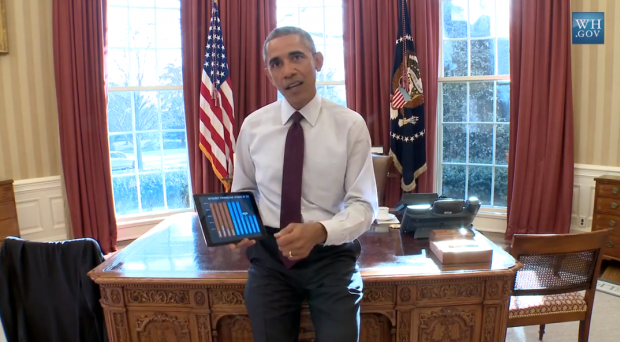 For us in the tech world it is widely known how badly American internet speeds lag behind other countries. The US is ranked 24th in the world for average broadband speeds according to Webindex. However, average citizens aren't as aware of how woefully inadequate our internet speeds are, especially considering the much higher prices we pay. For instance, Seoul has an average cost of $30 per month for the fastest internet, which would cost $300 a month in the U.S.

Obama used a tablet to highlight the difference between American internet speeds in several cities to the speed of other cities around the world. With the exception of a few key cities, such as Kansas City (which has Google Fiber), the overall US trails far behind competing countries. Obama did not outline the details of the plan, but mentioned that through executive actions he can take steps to encourage and enhance investment. Obama has wide latitude with executive actions, which do not require congressional approval.

Some of these steps likely will include reducing red tape in the heavily-regulated telecom industry. This will encourage large companies, such as Google, to expand their services to new areas. Tax breaks and other incentives will likely also be part of the package. Deregulation, at least to some extent, would allow other companies to come in and compete with price gouging ISPs, which are usually tied into the cable TV franchises.

Obama also pointed out that lagging behind other countries places the US at a competitive disadvantage. Faster internet at lower cost can equate directly to increased profits for businesses, and Obama feels that offering every single American 1000Mbps broadband will give the US the edge over other countries. Here's hoping the plan is successful, it's time for faster internet at reasonable prices.