As according to their press release sent out a mere 9 hours ago, Patriot have just announced they are increasing the storage sizing in their LX series of SDXC and microSDXC flash memory storage. 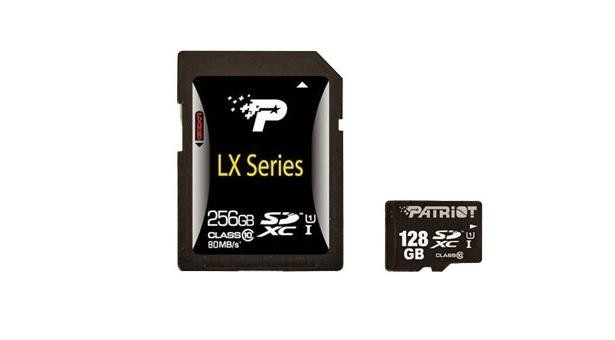 These come in the form of a 256GB UHS-I class 10 SDXC Flash Card and a 128GB UHS-I Class 10 microSDXC Flash Card. These new products are said to be available very soon for a MSRP of $129.99 and available for purchase from major American retailers such as Fry Electronics, Newegg and Amazon.

Said to be compliant with the latest SD Association 3.0, their new SDXC Flash Card is marketed as being able to store HD 1920 x 1080 video in real-time - providing you with a 80 MB/s peak read speed and a write speed of up to 20 MB/s. Other than this new 256GB model, Patriot also offer this card in 64GB and 128GB editions - backing them with a 5 year warranty.

Their new microSDXC Flash Card features a read time of up to 70 MB/s, alongside a peak write time of 20 MB/s. This card also comes in 64GB and 128GB models.