Geometry Wars 3: Dimensions comes out next week, with the developer teasing pre-order DLC and platform-exclusive levels for PC, Xbox and PlayStation.

On PC the game launches on November 25, while the PS3, PS4, Xbox 360 and Xbox One find themselves beginning to get addicted to the new puzzle shooter on November 26. Pre-ordering on PC secures you two bonus levels; the triangle-shaped Secret Eye, and the doughnut-shaped Blood Count. The Xbox One version receiving Blood Count for free if you pre-order. The Xbox 360 on the other hand, has no pre-order option, so Blood Count is provided for free for those who purchase the game between November 26 and December 2.

Both Xbox versions of the game include the exclusive cube-shaped Titan Box, which is colored in the sexy Xbox green. Moving onto the PS3 and PS4 versions of Geometry Wars 3: Dimensions, where Sony users in the US being the only ones able to pre-order. US-based PlayStation owners will receive the Secret Eye level. Both Sony consoles also include the exclusive Symbolic level, where enemies spawn in clusters shaped like the PlayStation control buttons. 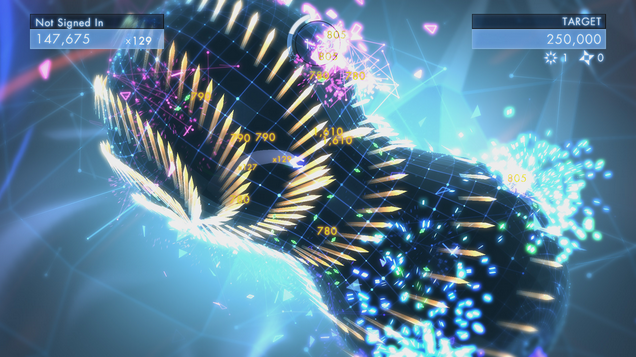