Supercomputing 2014: Intel and SGI combined their talents to create an HPC monster that touts 30 million IOPS of 4k random speed with 180GB/s of sequential throughput. Scaling storage performance and capacity in tandem is an ongoing challenge in the enterprise storage world, and old interfaces have been the primary culprit hampering these objectives. A diminishing point of returns is reached as more storage devices are added to the server, and performance begins to decline as latency increases. This is a particular pain point when utilizing RAID and HBA architectures in tandem with 2.5" SSDs. 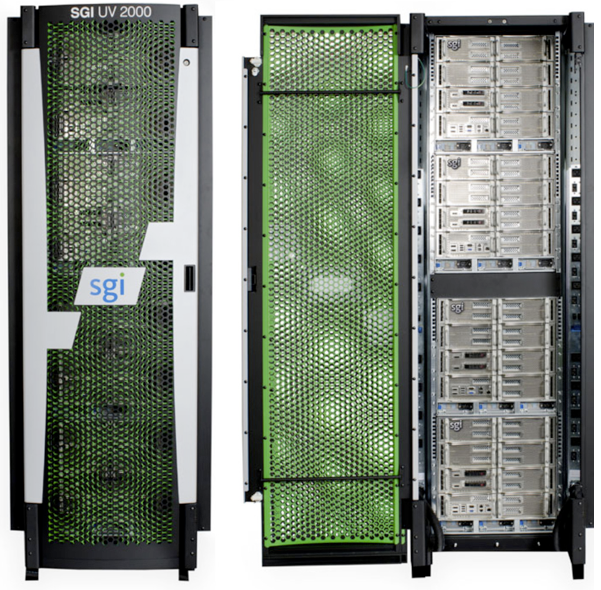 Enter the PCIe SSD. Moving flash to the PCIe bus provides better performance scaling, but many initial revisions of PCIe SSDs leveraged existing standards, such as AHCI, for host communication. This leads to performance degradation and excessive CPU overhead as performance scales. As explained in our Defining NVMe article, NVMe is a new storage protocol designed specifically for non-volatile memory. A slew of architectural refinements combine to provide the best performance possible over the PCIe interface. Intel's DC P3700 (covered in-depth in our Intel DC P3700 1.6TB NVMe Enterprise Review) is one of the fastest PCIe SSDs available, and the combination of NVMe and consistent performance provide enhanced scalability when deploying multiple units. 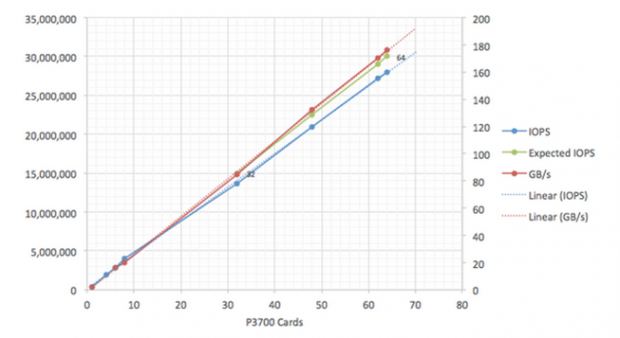 Intel and SGI decided to push the performance envelope by integrating a whopping 64 of the DC P3700's into a 32-socket server to test the limits of NVME scaling. The results are quite impressive, and the modified SGI UV 300H SAP HANA server surpassed 30 million IOPS in 4k random testing. Perhaps the most impressive aspect is the linear performance scaling in the graphic above. The solid blue lines denote the IOPS performance curve as more P3700's were added, and the dotted blue line is a trend line illustrating a theoretical linear progression. From the results we can see that the SGI beast barely deviates from the perfect scaling trend line. The throughput, tested with 128k sequential blocks, topped out just shy of 180 GB/s. 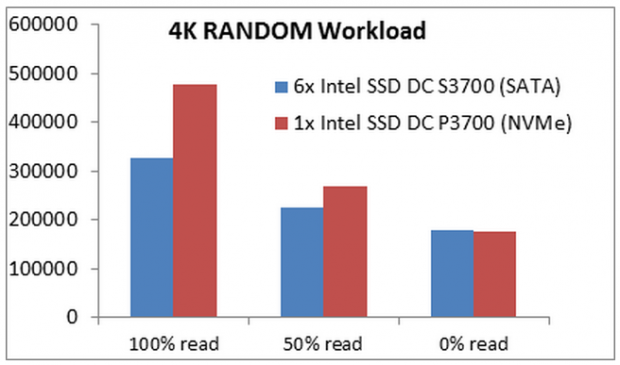 We can observe the performance advantages of a single DC P3700, in a more typical deployment, in comparison to six 2.5" Intel SSDs stacked behind a RAID controller. The refined NVMe protocol, and direct access to the PCIe bus, delivers tremendous performance advantages. We are highlighting performance of four of the 1.6TB Intel DC P3700's we have in the lab in an upcoming article. Spoiler alert: we didn't reach 30 million IOPS, but we are receiving impressive results in a variety of workloads and configurations. Keep your eyes on our IT/Datacenter section for the pending article, and dig through our library of competitive performance analysis to see how NVMe stacks up against leading PCIe SSDs in our Enterprise PCIe SSD section.