It feels like so long ago that World of Warcraft was this unstoppable MMO that made mountains of money for Blizzard, but Riot Games has since come in and run straight to the top of the MMO ladder, making billions of dollars along the way. 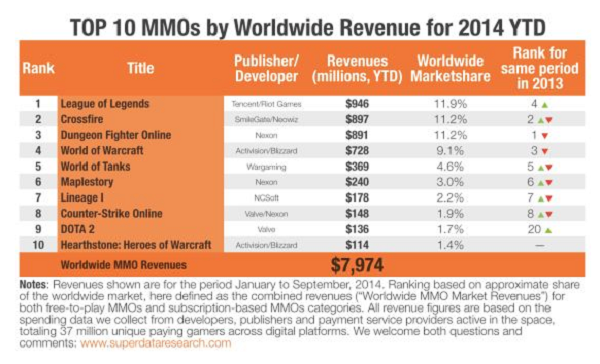 Last year, the game moved from fourth to third in the top 10 MMOs for worldwide revenue, but now it is sitting in the number one spot. Crossfire is right on its heels with 11.2% and has generated $897 million this year, Dungeon Fighter Online has 11.2% generating $891 million, World of Warcraft is now fourth with 9.1% and generating $728 million for Blizzard while fifth spot goes to World of Tanks with 4.6%, which has generated Wargaming a nice $369 million.

The entire worldwide MMO market is expected to generate some $11 billion this year, and by 2017 that number will grow to $13 billion according to Superdata. As it stands, MMOs represent 21% of the overall digital games market, with this number continuing to climb.