Intel may have just launched its Haswell-E and X99 platform, but that doesn't stop the chipmaker from teasing its upcoming HEDT (high-end desktop) processor train from slowing down. We're now hearing about the next-gen HEDT tech, Broadwell-E, which will be based on Intel's 14nm technology, using the same LGA2011v3 package. 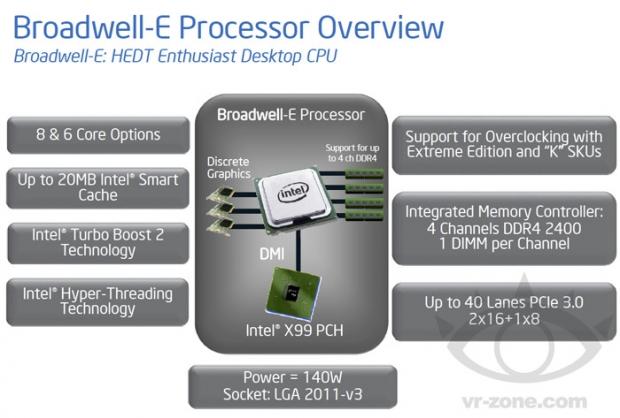 The new CPU will not be an architectural change, but it will provide smaller changes over what we have with the current Haswell-E processors. The new Core i7 Broadwell-E will be built on Intel's 14nm process, and will feature between 6 and 8 cores based on their, you guessed it, Broadwell microarchitecture. These cores will feature up to 20MB of L3 cache, and is pin-compatible with current Haswell-E, meaning we have quad-channel DDR4, too.

Intel could provide the full 40-lane PCIe interface, instead of the cut down 28-lane PCIe interface that the entry-level HEDT currently has. We should expect a 140W TDP, even with the die shrink, when the Broadwell-E processors launch in 2016.