Google has been known to hire cars, boats, hikers, mountain climbers and scuba divers, but this is the first time they mount its street view camera over a camel.

The search giant hired a camel named 'Raffia' to collect images of the desert around the Liwa oasis area in Abu Dhabi. With a help of the guide, the camel took pictures of the desert region called 'the trekker' which is usually strapped on a person for taking street view images. Najeeb Jarrar, Google's product marketing manager for the Middle East and North Africa said, "We hope this collection gives you a glimpse of what it may be like to travel the desert as caravan merchants have for the past 3,000 years."

The Liwa desert is a popular tourism spot in Abu Dhabi. Company spokeswoman Joyce Baz also said that undertaking such projects helps to boost tourism in the region. She said, "In the case of Liwa we fashioned it in a way so that it goes on a camel so that it can capture imagery in the best, most authentic and least damaging way." 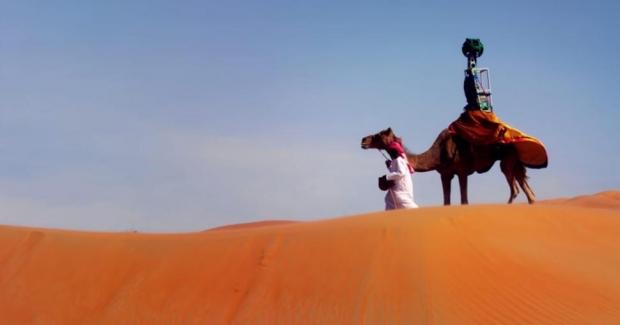 Along with the Liwa desert, Google added up to 50 new Canadian national and provincial parks to street view.