Consumers interested in purchasing a new game console, take note: Microsoft is offering a promotion from September 7 to September 13 in which any game is available for free with an Xbox One console purchase. Best Buy, GameStop, Amazon, Wal-Mart, Toys 'R Us, and other major retailers are expected to support the promotion. 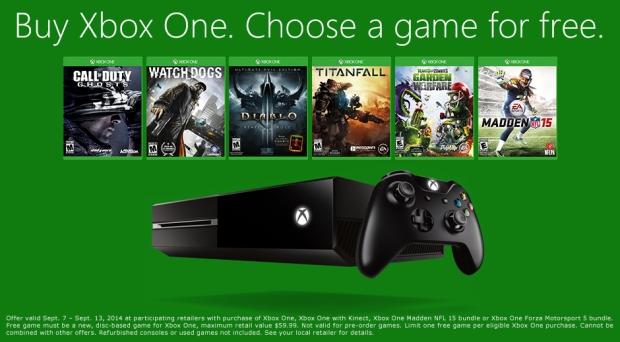 Most free game promotions force gamers to choose from a pre-determined selection, but Microsoft hopes offering more freedom will help boost sales. However, the game must be available during the week-long promo - and doesn't apply to games scheduled for release later this year - and won't apply to refurbished consoles or used games.

Xbox One hardware sales drastically trail the Sony PlayStation 4 game console, but this could help Microsoft close the gap. Also worth noting, Bungie's release of Destiny takes place on September 9, so this could help entice consumers to purchase an Xbox One instead of a PS4.