The United States Marine Corps is developing the Ultra Heavy-Lift Amphibious Connector (UHAC), which will be used to replace the Landing Craft Air Cushioned (LCAC). The UHAC could help shuttle Marines, supplies, and vehicles quickly and safely to the shore, including unloading multiple tanks.

The UHAC has two tracks utilizing foam flaps that allow it to cover rough terrain and still be buoyant while in the water. The current prototype is about 18-feet high, meaning it's not necessarily difficult to see, but developers hope to streamline it a bit smaller before final production. It should also be able to travel up to 25 mph at top speed in the water, though only reaches 5 mph during testing.

U.S. military researchers are always investigating how they can develop next-generation technology to improve battlefield efficiency. The Marine Corps Warfighting Lab has a difficult task to create realistic technologies while fighting falling budgets, and hopes its UHAC shows what the department can truly do. 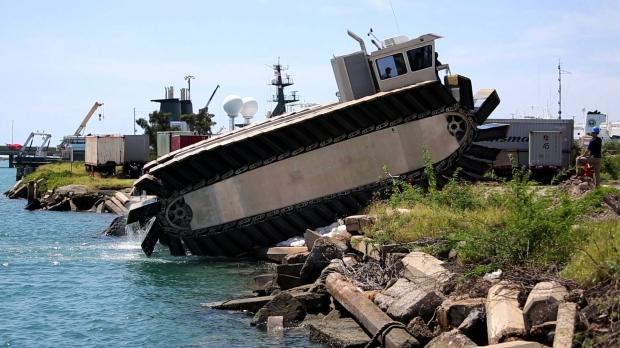