Hundreds of new emojis are to be added by the Unicode Consortium, and they will include among them a sweary gesture and a slew of wingdings. 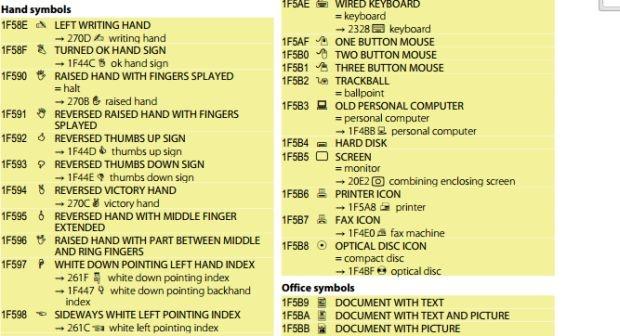 Also new to the universal text-based picture pack include a white dove, a chili pepper, a knife and fork surrounding a plate and a squirrel.

Emojis are small digital symbols that gained immense popularity in Japan as a complement to the traditional emoticon.

The update is part of Unicode 7.0, and is part of a formal process from the standards body to decide which digital symbols make the grade. As well as the emojis, the Consortium has decided to introduce less common languages across Asia and Africa as well as a shorthand system, Duployan, and "major enhancements" for Indic writing.

3,000 new Cantonese pronunciation entries will appear in 7.0 too, along with currency symbols for the Russian ruble and Azerbaijani manat.

If you're looking forward to all of the above and more - such as Spock's Vulcan gesture and an image of a levitating businessman - slow down: it's up to smartphone makers like Apple and Google as to when they'll actually be implemented.