Valve is planning to release an arcade game in Japan with one of its hit game Left 4 Dead. Taito's network NESiCA.net made an official announcement that its project that was previously known as 'Project Z' is 'Left 4 Dead: Survivors'.

The arcade maker previously released a promotional video with the name 'Project Z'.

Not much details were given, but the game will be released in 2014. As of now, it seems that Valve has licensed the game only to release the arcade version only for Japan. 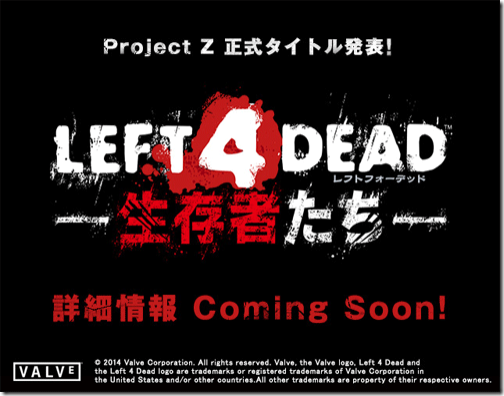 Left 4 Dead is a first-person co-op zombie survival game where you can team up with up to 4 players. While the game does have an 'arcade' feel while playing, it should be interesting to see if Valve does plan to expand into arcade gaming.

Whether it will be a hit or not, at least for the Japanese, remains to be seen. But it should be noted that this isn't the first time Valve worked with Taito for an arcade game. In 2006, both have released the game 'Half-Life 2: Survivor' in Japanese arcades.