A listing in a Chilean retail website pointed out that Bioware is re-issuing Mass Effect trilogy for the next gaming consoles PlayStation 4 and Xbox one. 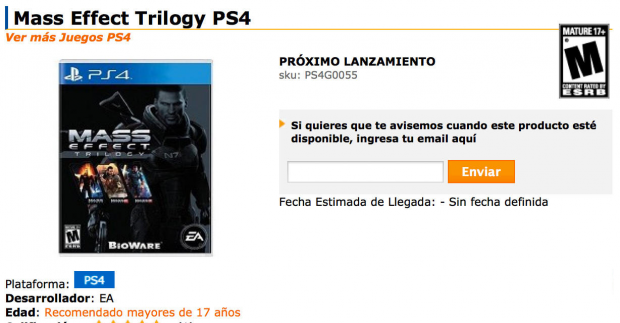 The pricing or the release date for the trilogy isn't listed, but it shows the game's case. This is confirmed by a Bioware via Twitter recently as well. As a response for the next-generation upgrade, the representative said,"We have discussed that internally. If we can put solid plans together we'll share."

The Mass Effect trilogy for PS3 and Xbox 360 contained all the DLCs and made the first Mass Effect for PS3 console for the first time. It shouldn't be surprising to see the same for the next generation consoles.

Few older-generation games were released for PS4 and Xbox one, such as Tomb Raider: Definitive Edition and even Rayman Legends. Sony also confirmed that the game 'The Last of Us' will be re-issued for PS4 in June.