A few weeks back I wrote a news post on an exciting new DIY wearables development board from Mbient Labs called MetaWear. In the time since the MetaWear campaign went live, it has managed to blow its initial goal of $8000 in just a two days and are almost at the $100,000 milestone. 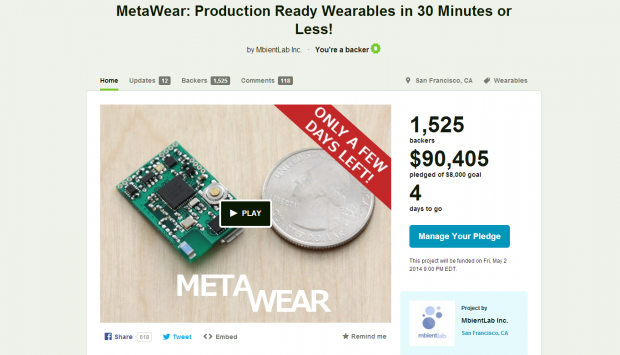 With their initial goal blown past by several hundred percent, MetaWear's campaign has just four days left to go, and has already reached its stretch goals as well. MbientLabs says that it will only be producing 2000 boards at Kickstarter prices, and that they still have some slots left, so if you are one the fence about backing this awesome project, you should jump in as soon as possible! I will have a full review of MetaWear up shortly after the campaign ends as I have managed to secure an early production model that should arrive in the next few weeks, so stay tuned to TweakTown for that.