Mazda has been making one of the most raced cars in motorsports for 25 years now with the Miata having a birthday this year. To celebrate the 25th anniversary of the launch of the original Miata, Mazda has a limited edition 2015 MX-5 that will have some special touches that has debuted at the New York International Auto Show. 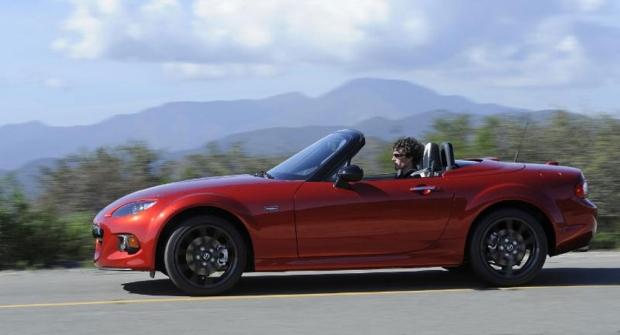 Mazda plans to sell only 100 of the 25th anniversary models in the US. Mazda says that it selected the best balanced parts for the engine in these cars. The anniversary edition will only be offers in Soul Red Metallic premium coat, which looks like maroon. All of the cars will be power retractable hard top models with a black top, mirrors, and windshield surround. The car also has dark colored alloy wheels. It looks to be derived from the Club version.

Anniversary models with the 6-speed manual will get Bilstein shocks. Inside the car gets Almond leather seats and door trim and satin chrome trim for the vent rings. The car will also wear special 25th anniversary badges. The car will go on sale later this spring with all 100 being available to order exclusively via Mazdausa.com.