There is nothing more I hate in this world that someone who cheats at online games such as Battlefield 4, Call of Duty, or any of the FPS shooters. The latest blockbuster to hit the FPS gaming world, Titanfall, has a solution for this. Over the last few weeks, Respawn Entertainment has been silent and letting cheater cheat so they could collect data on what could be hundreds of cheaters, and has just now implemented a fix that will take these players out of the general population. 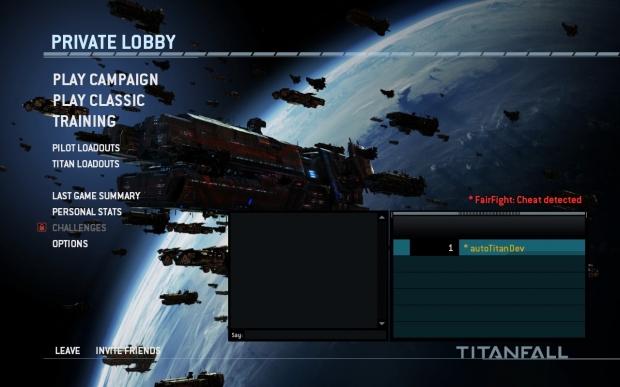 If you get caught cheating in Titanfall, you will not be banned from the game, but rather placed on a special blacklist that will only allow you to play on maps populated entirely by other cheaters. The segregation from legitimate players began this past Friday, and those caught saw a "FairFight: Cheat Detected" message pop up on their screen while inside the private lobby interface. Respawn included a contact email for those who feel they were incorrectly flagged to use, but users will have to prove they have not cheated.

Even though cheaters are banned from public servers, their non-cheater friends can still play with them though, but the match will have to take place on the isolated, cheater friendly servers. For now, the anti-cheating system is limited to the PC as it is the easiest platform to enable cheating on. While I despise cheaters to the core, I feel that this is the best solution possible for removing cheaters from the game, and could prevent those huge kill to death ratios we often see from cheaters.