CeBIT 2014 - A few days ago, Samsung officially launched its Chromebook 2 and today we got a chance to check it out first hand at the 2014 CeBIT conference held in Hannover, Germany. Johannes Knapp stopped by the Samsung booth and took a look 13-inch version that features a full HD 1920x1080 version of the device. Johannes notes that the Chromebook 2 features a Chiclets style keyboard and when closed, the top of the device has the same "leather" covering that the Galaxy Note 3 has.

The 13-inch version of the Chromebook 2 features 4GB of RAM, 16GB of storage which is augmented by a microSD expansion slot. A Samsung Exynos 5 Octa processor is on board, and thanks to a lot of power-saving technology the Chromebook 2 features up to 8.5 hours of battery life. A Smaller 11.6-inch version is also available with a smaller processor, but all other features remain the same. 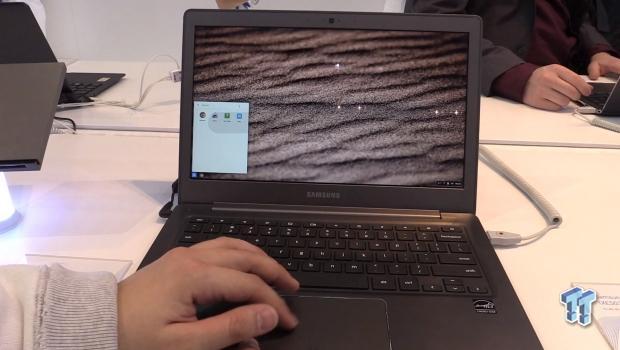