Watchdogs is one of the most highly anticipated games arriving on Sony's PlayStation 4 this year, but up until now, Sony has kept quiet about its launch date. We first got a glimpse of Watchdogs during PS4's launch event last year, and the game wowed us with its new style and ideas, but since then we have heard very little about the game other than a few features and specifications. 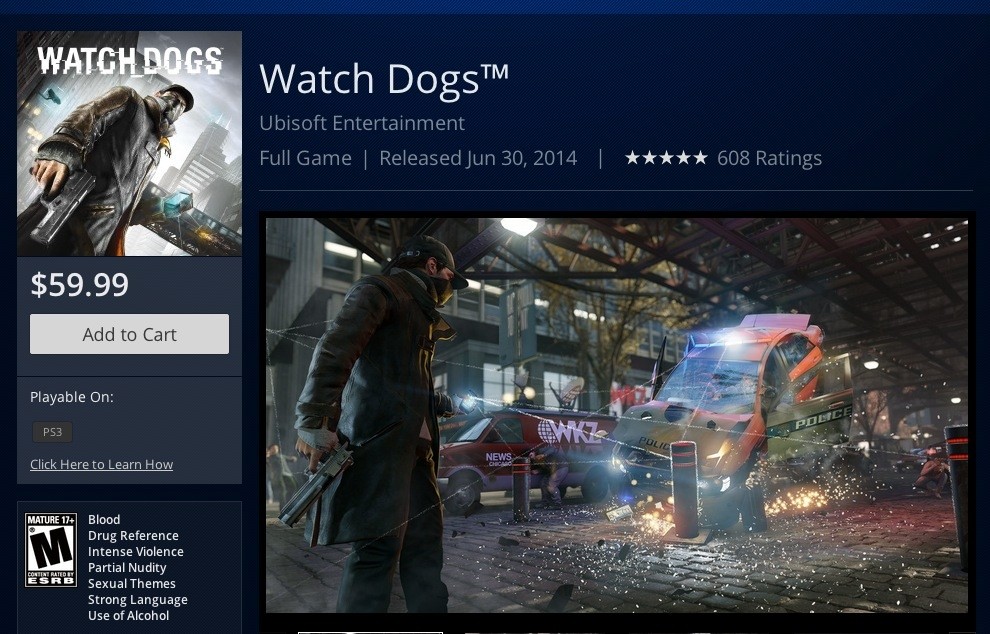 Today Sony accidentally let the release date for Watchdogs slip when it published the games launch date on its website. The leak says that Watchdogs will release on June 30, 2014, as well as showing a retail price of $59.99, and that 608 people have already rated it... This leak is most likely the result of a website developer testing functionality, and all the information could be false filler, that was entered for testing purposes.

Set in Chicago, where a central network of computers connects everyone and everything, Watch_Dogs explores the impact of technology within our society. Using the city as your weapon, you will embark on a personal mission to inflict your own brand of justice.

Chicago's overarching network is known as the Central Operating System (ctOS), and it controls almost all of the city's technology and information - including key data on all of the city's residents. You play as Aiden Pearce, a brilliant hacker and former thug, whose criminal past led to a violent family tragedy.

While seeking justice for those events, you'll monitor and hack those around you by manipulating the ctOS from the palm of your hand. You'll access omnipresent security cameras, download personal information to locate a target, control traffic lights and public transportation to stop the enemy... and more.