MWC 2014 - Mobile World Congress has come and gone for another year, but now that the mobile extravaganza is all wrapped up and finished, we can reflect on the show that was. Moor Insights & Strategy, a technology analyst company, walked around the event taking notes on what companies were showing off. 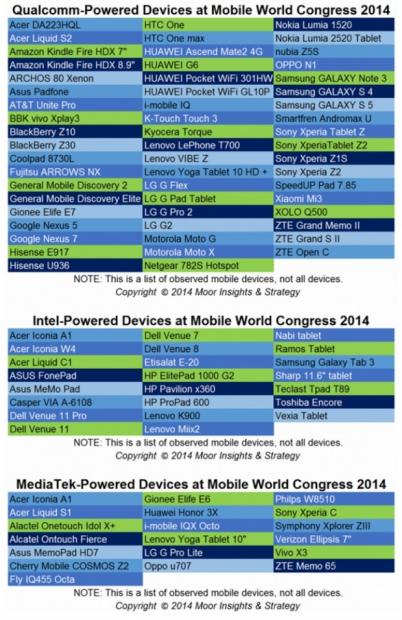 What they saw was surprising, with Qualcomm powering a considerable chunk of the mobile devices at MWC 2014. You can see in the image above, that Qualcomm powered significantly more devices than Intel, with MediaTek powering nearly the same as Intel, another surprising take on things. This of course doesn't represent all devices, but just the ones that Moor Insights & Strategy had taken note of.

Intel is only starting to rev its mobile engine, but from the looks of things Qualcomm is definitely has a massive head start. We can see that Qualcomm is powering some of the most popular, best-selling and future best-sellers on the market, such as the upcoming Galaxy S5 from Samsung, the Nexus 5 and Nexus 7 from LG and Google, as well as the LG G Pro 2, and many, many more.