AMD has just announced its new Opteron A1100 processor, a chip built on a 64-bit capable ARM-based server SoC. This chip has been branded as an Opteron processor, which is the first processor the two companies have worked together on. 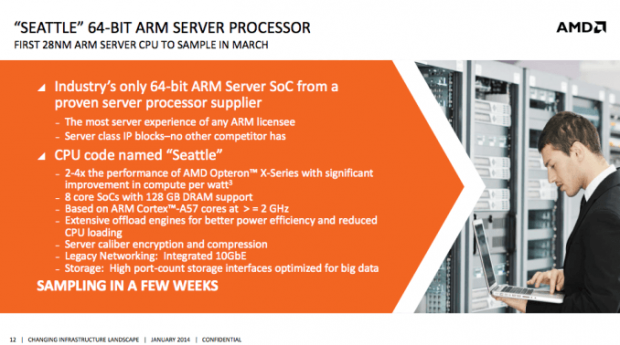 The new Opteron A1100, codenamed "Seattle", comes in two flavors: four or eight CPU cores. These cores are based on ARM's Cortex-A57 design, which can be clocked up to 2GHz. Each core shares 1MB of L2 cache, as well as a total of 8MB of L3 cache that all shares can access. The SoC is built at GlobalFoundaries on a 28nm process.

Opteron A1100's memory controller is capable of supporting both DDR3 and DDR4 memory through its 128-bit bus, and AMD's reference platform will support up to 128GB of Registered DDR3 DIMMs. The SoC features an 8 lane PCIe 3.0 controller that supports one x8 or two x4 slot configurations, plus an 8-port 6Gbps SATA controller, and two 10GbE ports.

AMD's new Opteron A1100 chip will sample in March, with the company predicting that ARM-based solutions will occupy 25% of the server market by 2019.