It's no secret that AMD will launch its new 28nm Hawaii architecture based GPUs next week on the 25. The event will be held in Hawaii with AMD flying out tech media partners from all over the globe. Today, the company began sending out its official press invitations, which you can see below. 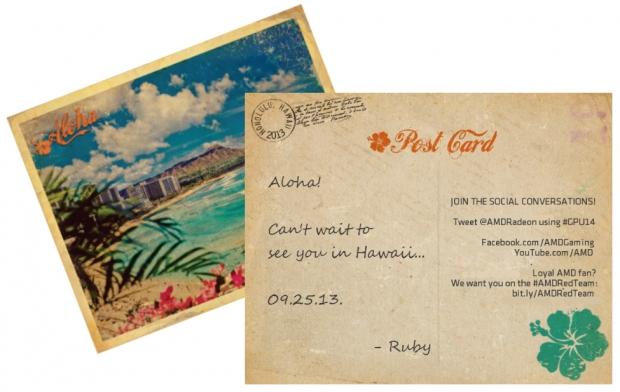 Not much else is known about the event other than AMD is expected to push Battlefield 4 pretty heavily as it is expected to be the bundled game with the company's flagship Hawaii based GPU. We have heard rumors that an actual Aircraft carrier will be part of the event and that there could be another big announcement as well.

Our own Shawn Baker will be on hand for the event and will be feeding us tons of content, photos, and videos from AMD's Hawaii launch event, so tune in to TweakTown for the most comprehensive coverage of the event on the net. I want to know what you think about the rumored upcoming GPUs? Can AMD release a single card solution that can compete with NVIDIA's Titan? Let me know in the comments.