A good headset is a must for anyone who considers themselves to be an elite gamer. SteelSeries knows this and has released its new Siberia Elite Gaming Headset for pre-order starting today. Only available in White at launch (with black coming soon), the new Siberia Elite features the newest generation of SteelSeries audio drivers and is equipped with Dolby technology to reproduce a realistic 7.1 virtual surround sound experience. 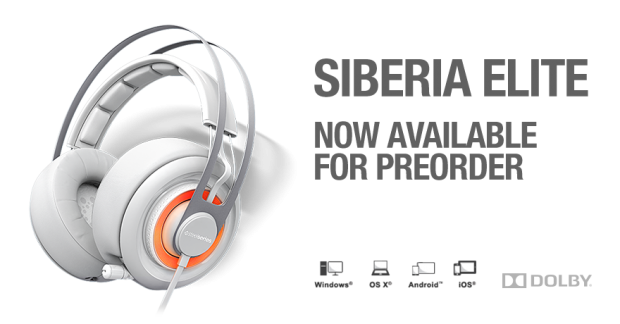 The headset includes extra-large memory foam ear cushions as well as the company's signature Siberia self-adjusting suspension system. The ear cups also feature an RGB illuminated ring that is capable of reproducing 16.8 million colors, while dials on the ear cups handle the headset's audio and microphone controls. The headset also features a retractable boom mic that stores neatly inside one of the ear cups while not in use.

The headset ships with SteelSeries' new Engine 3 software that enables users to select illumination settings, adjust the equalizer, and activate microphone features. The new Siberia Elite also features limitless connectivity via a swappable cable system that makes it instantly compatible for PC, Mac, tablets, and phones. The Siberia Elite retails for $199.99 and can be purchased on the company's website.