With the launch of their latest Adaptec Series 8, PMC delivers >700,000 4K random read RAID I/O/s unleashing the potential of 12Gb/s SAS SSDs. The Series 8 family is spread across five models based on PMC's 12Gb SAS RoC controller in a low profile form factor. Configurations include 16-port adapters that connect twice the drives of competing solutions, providing the flexibility to create hybrid storage arrays with any combination of SSDs and HDDs. 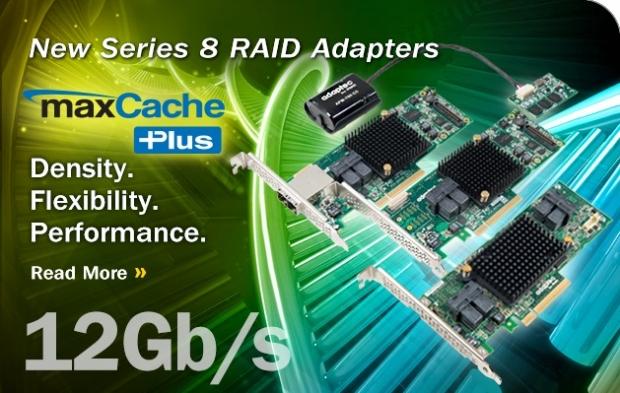 The fourth generation caching solution from Adaptec now includes tiering technology allowing customers to maximize their investment. maxCache Plus with Series 8 offers additional flexibility to configure all storage devices in a server environment, not just devices connected to PMC hardware enabling admins the ability to leverage their storage assets according to their performance capabilities.

"Enterprise datacenters and cloud environments have a need to accelerate application performance while coping with massive data growth cost effectively," said Jeff Janukowicz, research director for solid state storage at IDC. "12Gb SAS architectures and tiering technologies are poised to overcome these challenges and help unlock the potential of SSDs, which is one of the key reasons IDC expects shipments of SAS SSDs to grow at a 75% CAGR from 2012 to 2017."

The complete family of Adaptec Series 8 RAID controllers includes five unique SKUs that will be available in Q4 2013. Adaptec by PMC will demonstrate the new Series 8 RAID adapter family at the Intel Developers Forum, September 10-12 2013 in San Francisco, California.