HTC has once again confirmed that the HTC One will be getting Android 4.2. This latest confirmation comes amidst rumors that HTC would not be updating the One to the latest Android build. One mobile operator tweeted a response to a user's question, saying that the latest firmware had been pulled without an updated schedule being provided. 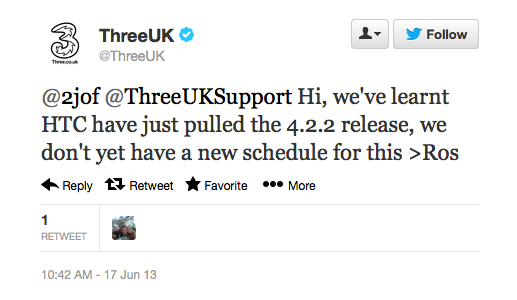 Engadget reached out to HTC, who confirmed that Android 4.2 is still planned for the HTC One. HTC noted that users may have to wait a bit longer than previously expected for the upgrade, but no official roll-out date was provided by the company. We'll let you know when HTC launches Android 4.2 for the HTC One.