The mid-range NVIDIA GeForce GTX 760 just may be the most anticipated GPU of the summer as the "60" series cards are usually powerful enough to run all of the year's new games with very respectable settings while remaining budget friendly. As such, gamers all over the world have been diligently awaiting the release of the card. This morning, we are learning what kind of punch the GTX 760 will pack. 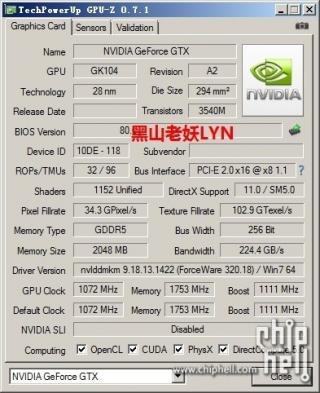 According to a leaked screenshot from GPU-Z, the new GTX 760 will be a true successor rather than a rebadged GPU from the previous generation. The 760 will feature a GK104 GPU with only three of its graphics clusters enabled, while leaving the memory and raster operations untouched. This gives the GTX 760 1,154 CUDA cores, 96 TMUs, 32 ROPs, and a 256-bit GDDR5 RAM bank clocked to a massive 7 GHz. Core clock is set at 1072 MHz with a GPU Boost of 1111 MHz available.