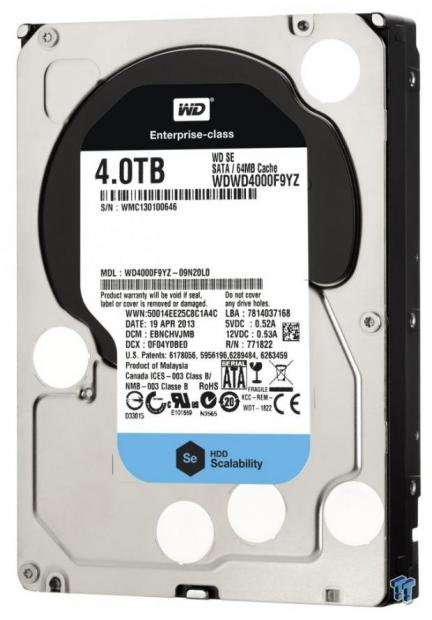 The new drives are built on an enterprise-grade platform designed for reliable 24x7x365 datacenter operation. The drives were tested to five million hours of functional and thermal testing and over 20 million hours of additional testing while being under an actual workload in server and storage systems environments.

Western Digital had the following to say about the new WD Se line:

"Today's cloud datacenter installations require a cost-effective way to build large-scale storage systems, while maintaining the 24x7 reliability necessary to minimize total cost of ownership. "WD's utilization of vast amounts of manufacturing and engineering data has forced us like many other companies to use mapreduce methodologies to effectively analyze our data. The WD Se hard drives are used in our own big datacenter, where we have gained real-world experience with Apache Hadoop."

The new drives have begun shipping in three models (WD2000F9YZ, WD3000F9YZ and WD4000F9YZ) that range from 2TB to 4TB capacities, MSRP for the new WD Se drives range from $159.99 to $309.99 for the 4TB model. Western Digital says the drives are available now through select distributors and resellers.

For those of you who are interested in the new WD Se line's other features, I have listed them below.