While the rest of the world waits on the Googlerola X Phone, rumors of LG's next-generation Optimus G2 are growing every day. This morning we are learning a little more about the G2, which LG teased at the Mobile World Congress, a couple of months back. 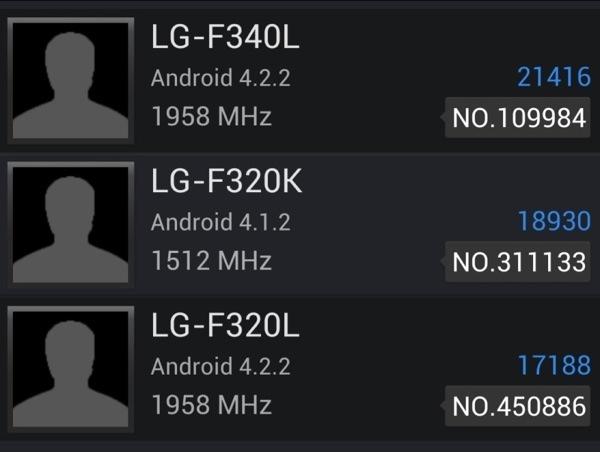 The leaks which were first spotted by Blog of Mobile come in the form of a set of benchmarks made on the Android benchmarking app Antutu, the same app that recently brought us the Motorola X Phone benchmarks. If you believe the leak, the Optimus G2 will come in three flavors that are most likely tuned to respective regions they will be sold in.

The F320L and F340L appear to be higher-end models that feature Android 4.2.2 and 2GHz processors, while the F320K houses a slower 1.5GHz chip and Android 4.1.2. While it is not unheard of to tweak models based on region, the jump from a 2GHz processor to a 1.5GHz model personally leads me to believe that the F320K is a different phone than the G2.