This morning everyone's favorite file sharing superstar, Kim Dotcom, announced via Twitter that he would pay $500 to anyone who managed to video US Attorney General Eric Holder or Vice President Joe Biden during their visit to New Zeeland next week. 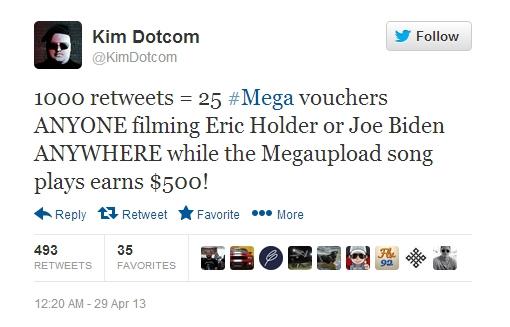 There is one catch, though. The video must contain real time playback of the Megaupload song, and cannot be added into the video after it was taken. Dotcom believes that Holder is responsible for Megaupload being seized as well as the guy behind the Great Recession financial crisis that led to a downswing in the world economy.

While that last part may be a bit of a stretch, Holder is directly responsible for the seizure of Megaupload (as head of the Department of Justice), the US government agency that ordered the website to be taken down.