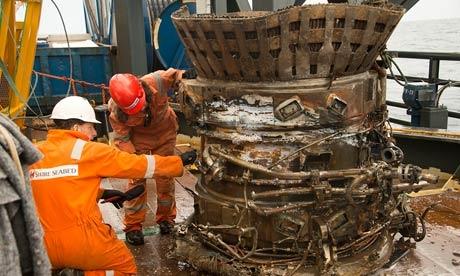 Bezos' team sent remotely operated vehicles (ROVs) to nearly 14,000 feet in order to photograph, and then eventually left the engine components out of the Atlantic Ocean - something they compared to working in an environment like the moon's sufface. He added:

We on the team were often struck by poetic echoes of the lunar missions. The buoyancy of the ROVs looks every bit like microgravity. The blackness of the horizon. The gray and colourless ocean floor. Only the occasional deep sea fish broke the illusion.