Just yesterday we saw supposed leaked images of Samsung's next flagship smartphone, the Galaxy S IV. This morning we are waking up to not one, but two big news items about the S IV which is set to launch this Thursday.

First up, we have another "leak" from the Chinese website 52samsung.com, this time in the form of a hands-on video. In the video we get a glimpse of the smartphone with the back case removed and close ups of the battery. The model in the video features two SIM card slots which means that the phone in the video is most likely a DUOS variant and not the single SIM version we will see here in the US. 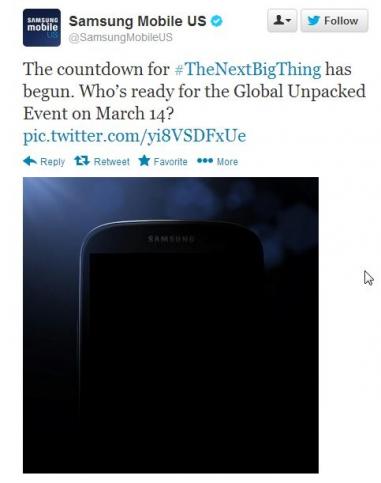 Finally, Samsung has released its first official image of the Galaxy S4 in the form of a image on the company's official Twitter account. We are able to see the top 1/3 of the phone and it looks identical to the phone in the images that 53samsung.com leaked yesterday. Samsung will launch the Galaxy S IV this Thursday at 7pm EST an event held in NYC's Times Square. Stay tuned to TweakTown for full coverage of the event.