SpaceX is working on pioneering the exploration of the next frontier: Space. The private company has already had huge successes, winning the contract to deliver payloads to the International Space Station aboard its rockets. Now the company is working on developing a reusable Grasshopper rocket. You can see the latest test below:

It's not clear when SpaceX will make use of this rocket, as it comes with a somewhat peculiar design. The rocket is designed to take off and land vertically on its metal legs. The rocket has been undergoing testing since September 2012 and this latest test saw the rocket climb to 262.8 feet and hover before landing.

The 100-foot-tall rocket has a good distance to go before making it to space, but it seems to be well on its way. "The US is a country of explorers. People need to believe that [space travel] is not going to bankrupt them," stated Musk at his SXSWi keynote. 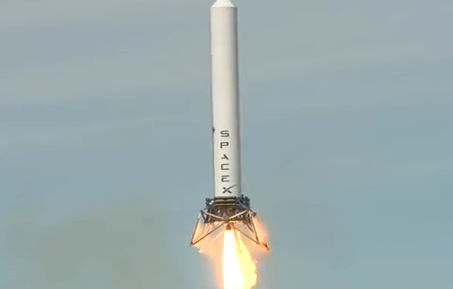