If you are a poor pool player, you're certainly not alone. A team of students from the University of the Algarve in Portugal have created an augmented reality system that projects a prediction of where the cue ball will go after being hit. While it won't make you the best pool player ever, it will certainly aid in some shots.

The system uses a camera to detect the cue ball's location and the direction the pool cue's direction. The projector then shines lines of light down on to the table to show the predicted path of the ball. The system isn't capable of predicting things such as spin and speed, but it will certainly help with simple shots.

It's akin to what you would likely get on a virtual game of pool. "We developed an algorithm that tracks and analyzes the ball's position. It detects lines that match up with the cue. The computer's connected to the projector too, so it updates right away." Right now, it's more of a research project than anything, but it's easy to see this becoming a stand-alone product that could be used to train billiard players. 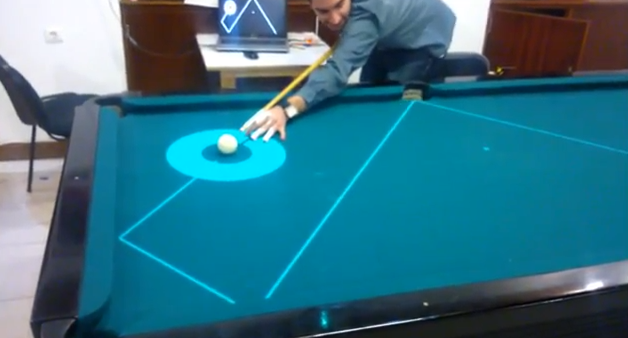