NVIDIA have been talking up their Tegra SoCs for quite some time now, and we knew to expect some magical things from Tegra 4 - but just wait until you see what this bad boy can do. Engadget have been hands-on at Mobile World Congress in Barcelona, where they ran some benchmarks more than once and couldn't believe their eyes. 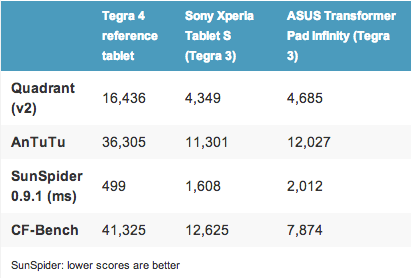 As you can see from the above numbers, that is quite insane. The numbers above numbers are devices with the latest software - namely Android 4.1 Jelly Bean - and not the stock Android 4.0 ICS that would normally come on them. The scores on the Xperia Tablet S and Transformer Pad Infinity are from ICS, so even if we added 10-20% on those scores, they still don't begin to compare with the Tegra 4-based reference device.

It looks like we should expect 1080p@60 gaming on Tegra 4-based devices, meaning that while AMD may have scored the contracts for all next-gen consoles - including the Sony PlayStation 4 - NVIDIA might offer similar performance from something that sits in your hand with a battery attached to it.