Thanks to a mystery device arriving on the NenaMark2 site, we could be looking at the first benchmarks of the Verizon-bound Samsung Galaxy S IV. The model number slapped to the phone is SCH-i545, similar to the Verizon model number for the Galaxy S III - SCH-i535. 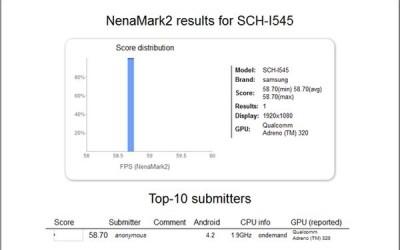 If the device is indeed the upcoming Galaxy S IV, we should expect a Full HD resolution of 1920x1080, a 1.9GHz processor and Android 4.2 Jelly Bean. As for the GPU baked into the mystery device, it looks to be an Adreno 320 GPU. We should hopefully see an introduction to the iPhone competitor on March 15, with a release sometime in April throughout Europe before it crosses the pond and makes an appearance in the United States.

We should soon reach a time where every day or two there's some new information on the Galaxy S IV - Samsung have reached the point in their career where they're now having rumors and specs combed through just like any new iPhone.