Zynga, the social gaming company that made it big on Facebook, has seen a boost in its share prices after beating fourth quarter expectations. The company announced its fourth quarter results today, which were higher than previously expected and included a 1 cent per share earning on an adjusted basis. 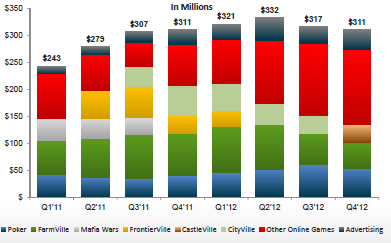 Previous estimates had Zynga losing 3 cents per share. Zynga's stock has received a "buy" rating from Bank of America/Merrill Lynch and has ticked up in after hours trading. First quarter results are expected to be a loss between $32 million and $12 million on revenues of $255 million to $265 million.