Thanks to @evaleaks, we're looking at the press image of the next high-end smartphone from Huawei. The Ascend P2 continues on from the Ascend D2, where we see the device feature a 4.5-inch, 1080p display. 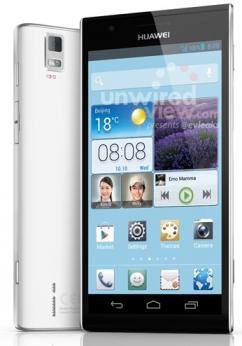 The Ascend D2 had a 5-inch screen, so we're seeing a slight reduction in screen size, but a bump in resolution. Huawei's Ascend P2 will include an in-house-built quad-core CPU running at 1.8GHz, 2GB of RAM, a 13-megapixel rear-facing camera and a hopefully-lasts-all-day 3000mAh battery. We should expect it to arrive with Jelly Bean.

Huawei will most likely have more to say at Mobile World Congress next month in Barcelona.