Can't say I didn't see it coming - I pretty much said the same thing in my review, but it looks like Consumer Reports' latest conclusion is that the iPhone 5 is the worst of the top smartphones on the market right now. Yes - the worst. 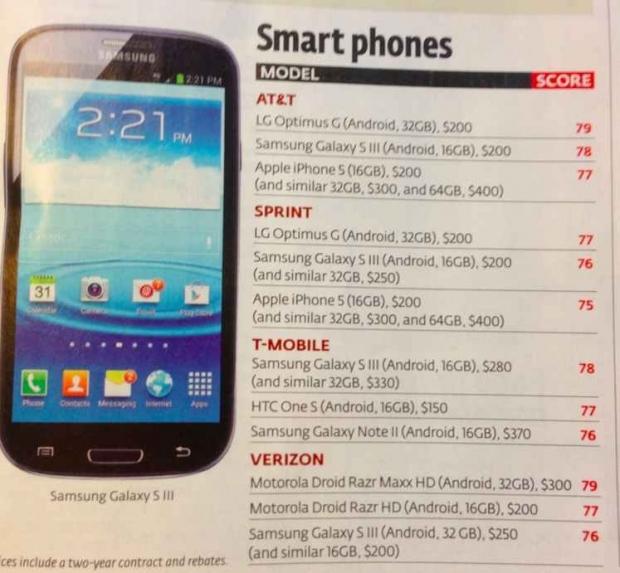 In the February issue of the magazine, we'll get to see the full piece, but for now we have a simple photo above. With AT&T, LG's Optimus G ranks as number one and sitting on number two position is Samsung's Galaxy S III. In third position, we have the iPhone 5.

The same goes for Sprint, in the same order, but things change with T-Mobile - Samsung's Galaxy S III enjoys first position, HTC's One S pops up in position numero duo and in third position we have the 5.5-inch, just-released Samsung Galaxy Note II smartphone. Verizon is completely different again where two Motorola smartphones take out position one and two with the Droid Razr Maxx HD and Droid Razr HD respectively, and third position goes to the Galaxy S III from Samsung.

This means that Apple's iPhone 5 doesn't even rank in the top three phones with Verizon. Samsung is in force with all carriers sporting a Samsung phone, or two, in their top three smartphones. How's dem apples, Apple?