Samsung have unveiled some of their new home theater products ahead of the Consumer Electronics Show 2013 in Las Vegas, included with the announcement is Samsung coming out with what they're claiming to be the world's first sound bar system to sport a vacuum tube. We're also greeted by a new way of Bluetooth for TV audio reproduction, gyros that improve sound quality and finally an all-in-one home theater system that features an amplifier made with Gallium Nitrade. 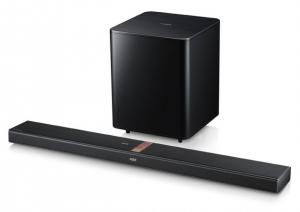 Samsung's HW-F750 Vacuum Tube Soundcar is a sound bar and wireless subwoofer product, and is the South Korean company's latest digital audio product that sports a vacuum tube in the pre-amp stage. Not only does it look great, but it should sound great too. The sound bar will also sport Bluetooth for wireless audio streaming from supported Samsung TVs, and also comes with a built-in gyroscope which is used to help adjust the speakers' sound for optimal results based on the speaker's positioning. 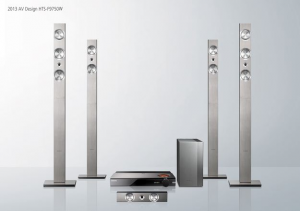 Samsung's 2013 flagship all-in-one home theater also sports a vacuum tube in the pre-amp stage, as well as an amplifier that is made from Gallium Nitride. The system is capable of some 1330-watts, and its included Blu-ray player is capable of 4K/Ultra HD upscaling and an audio override feature which powers the system up and mutes the Samsung TVs speakers with a single press of a button - simple! 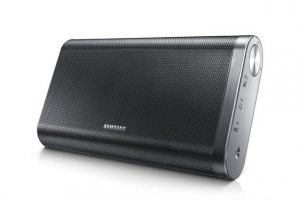 Samsung's DA-F60 sports the same Bluetooth capability of the previous vacuum tube model, but thanks to its wireless technology it can double as a miniature sound bar. Apr-x capability is on show here, which will provide excellent sound quality with mobile devices. Samsung haven't mentioned whether it will include a rechargeable battery for proper portability, so we'll hear more on that at Samsung's press conference at CES. 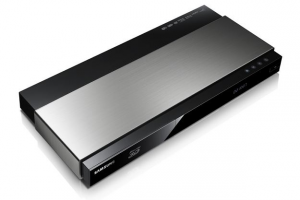 Here we have Samsung's top-of-the-line Blu-ray player which sports a speedier dual-core processor, which will provide better image processing and web-browsing speeds. Of course, 4K/Ultra HD upscaling is at play here - more details on the BD-F7500 Blu-ray player at Samsung's press conference should be made available.