A picture of a GameStop Black Ops 2 DLC poster has leaked to the internet and provided precious details about the upcoming DLC. In the picture, you can see that there will be four new multiplayer maps, a new zombies map, and a new SMG. As far as the details go, we really only have names, so it's time to let your imagination go wild as to what the maps will look like. 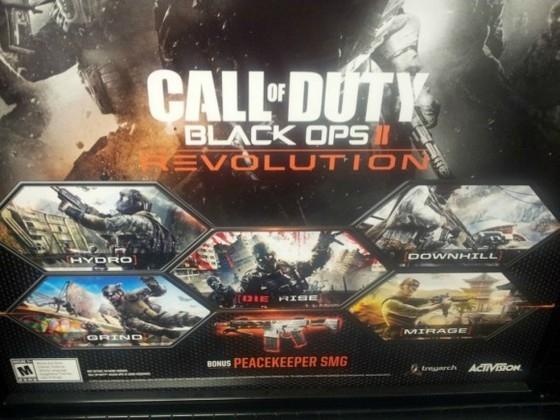 "Hydro", "Grind", "Downhill", and "Mirage" are the new multiplayer maps, with "Die Rise" being the new Zombies map. Downhill appears to be a ski resort, which would make sense, while Mirage appears to be in the desert. The other two pictures aren't as clear and the names could align the maps in many different settings.

The SMG is named the Peacekeeper and there are no details as to which game modes it will be available in. The DLC is set to come to the Xbox 360 on January 29 and will likely cost $15, if it stays in line with the pricing of Black Ops DLC. If you have the Season Pass, you'll get the DLC for free when it releases.