I'm sure by now you've read about the very, very sad tragedy in the US with the Newtown school shooting - but it looks like Anonymous are back because of it. 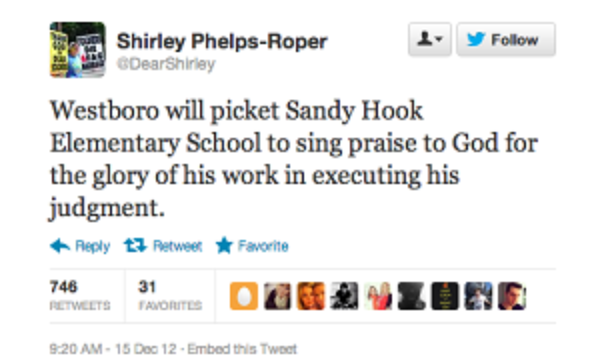 Westboro Baptist Church are known for their hateful way of pushing their beliefs, even going as far as doing so at funerals. The WBC have shown up at funerals of veterans and other venues to try and convert grieving families with their anti-gay message. The group says that, and wait for it - the world's tragedies are linked to homosexuality and a so-called "homosexual agenda". The WBC announced they planned a picket at the Sandy Hook Elementary School after the shooting spree killing 26 children and teachers.

Anonymous splashed back by dumping personal information of WBC members which included phone numbers and home addresses. The hacker collective also released a new video talking about the WBC, where they said "from time to time you have received this message, our attack protocol has past been executed and your downfall is underway".

Anonymous has also gone the legal way, publicizing a petition to the White House that asks for the WBC to be legally recognized as a hate group. Considering the WBC think that "God sent the shooter" to Newtown, that in itself should have some media attention as a hate group.