Most Arrested Development fans know that Netflix has commissioned two more seasons of the hit TV show to be produced before they make a movie. The production has been put on pause and is set to resume in late January. But, the good news is that Mitch Hurwitz has reportedly shot more material than originally planned. 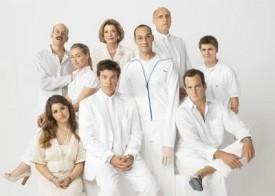 Netflix originally ordered 10 new episodes, but Hurwitz and the producing studios have reportedly approached Netflix and gotten them to increase the order to 12 to 15 episodes. Filming was originally scheduled to end before Thanksgiving, but with the increased order, they have filmed for an extra few weeks.

Hurwitz has taken the existing footage and is reviewing it to figure out just who he will need to film in January and how to incorporate the extra ideas. Netflix is planning to release all of the episodes at one time in spring, so they still have time to finish up production without delaying the planned release.

"We are thrilled with the direction of the show, with the footage we have seen and with the relationship between Mitch, Imagine, 20th and Netflix," a Netflix spokeswoman said. "At this time, we are not confirming or announcing the final episode count but we are sure fans will be thrilled when we do."