Apple released iTunes 11 today after having delayed it from being released in October. Included in the new version of the software is a pretty nifty feature that will surely help users who redeem many Apple gift cards. The feature in question allows users to take a picture of their iTunes gift card to redeem it. 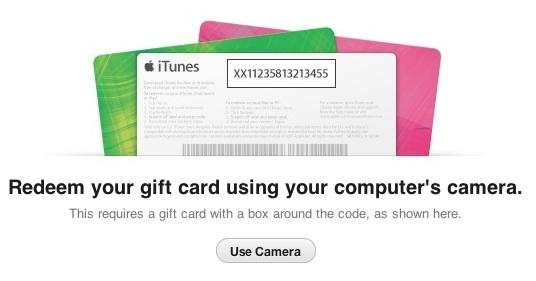 Now, instead of having to type out that long and confusing 16-character string, users will be able to take a picture with their computer's camera. The new feature requires iTunes gift cards that have a box around the code. The box aids the system in detecting the code and I imagine that Apple started printing those boxes as soon as they knew this feature would be present in iTunes 11.

iTunes will, of course, still allow users to manually type in the code. This is needed because not everyone's computer has a camera and sometimes OCR just doesn't work very well. Not to mention, some people may still have gift cards that were printed before the updated cards with the boxes went into production.