Solar power, up until now, has not really been all that great - sure, it provides a different method of powering things, but it doesn't capture anywhere near enough light to truly replace coal, oil or nuclear power. But, this week a team of MIT researchers hope to put us on the path of truly sustainable solar power. 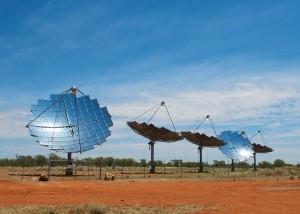 Current solar power technology is not that efficient, with the latest development in solar systems delivering around 32% efficiency. This was met with titles of a "major breakthrough" in solar power - but in reality, it's still nowhere near as good as it should be. At this rate, solar farms need to be gigantic, taking up valuable space, in order to collect a useful amount of energy. The price per square foot has always been another issue altogether.

The main issue is that solar energy collectors can only absorb a small amount of the energy being blasted onto it from our star, with the rest of the potential energy not being captured. A recent MIT study has proposed an "atomically thing" sheet of semiconducting material that would be stretched by pushing a pin down onto the center. This may not sound like much, but it has endless possibilities for the future of our species.

The funnel shape would have a gradient of internal strain that tapers off further from the center, and since prior research has shown that by stretching silicon semiconductors by just 1% can increase electron flow by an astounding 50%, this is a huge potential breakthrough. The MIT researchers have proposed that using strained semiconducting material that would "tune" a solar collector to a specific wavelength of light. Within the limits of the material itself, changing the pin pressure will adjust the shape of the funnel and most of all, the edges of the absorption spectrum.

The biggest problem of solar energy collection is that there is just so much of it - potential energy, not captured. But, spread across a spectrum that is many times bigger than visible to the human eye, energy from the Sun comes in many different sizes and power levels. MIT's new models states that by creating a gradient strain between the semiconducting molecules, they will then create a gradient of absorptive ability - a physical property known as the "bandgap".

Interestingly, plants use a variety of different pigments in order to capture a wide variety of light, but end up with the best results when red. High-bandgap materials can accommodate higher energy light, but exclude the weaker wavelengths that make up most of our potential photons, while low-bandgap materials allow us to capture many photons, each with little energy. Now all that's needed is a cell that can capture along that spectrum.

MIT's proposed solar funnel would capture light in multiple wavelengths along its surface, and would direct every captured photon quickly down towards the collector - unlike modern organic cells which rely on diffusion to bring excited unit to the collector. This way is much more efficient, and is half of the entire point of this technology - to not just absorption, but the collectors phases efficient enough for mass use - you know, the human race.

Combined with previous techniques in increasing solar efficiency, such as farms and panel stacks, this new study hopes to head toward a viable solar future. Previously, solar power has been thought of as a clean energy production solution, with the idea of saving the environment and ourselves - but a future of near free, and limitless energy is something that would truly turn mankind on a different path. Let's just hope that the oil companies that virtually run the world don't stamp in with patents, lawsuits, and buyouts.