We reported a rumor yesterday about a possible Nintendo Wii Mini being made available and it looks like we have another piece of the puzzle that may make this rumor completely true. 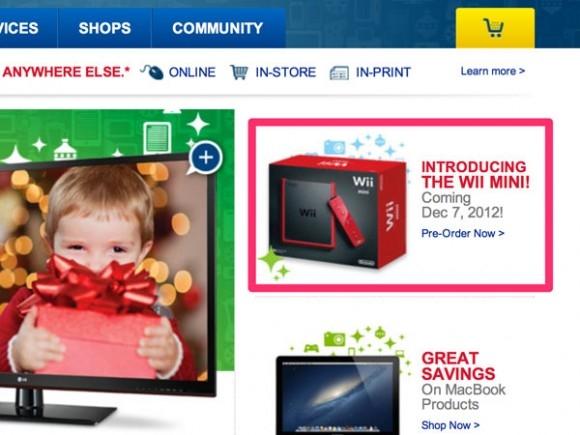 According to a leaked image on the Best Buy Canada homepage, it looks like we indeed can expect a Nintendo Wii Mini console being made available on December 7, 2012. The image says "Pre-Order Now," which leads us to believe we'll be hearing about the Wii Mini before its official launch.

Seeing as this is the first time we've heard of the Wii Mini, it goes to show just how well Nintendo did with keeping their reveal secure up until this point. I know I didn't expect them to make an already small console even smaller.

Judging by the leaked image, we can expect the Wii Mini to be black with a red trim around it and include a red Wii remote.

No official word from Nintendo on the Wii Mini, but something tells me with this recent leak, we should be hearing more about it very soon.