If you have any sort of modding ability, this might be the time to stand up and pit yourself against the competition across the world. Elitegroup Computer Systems (ECS) have just announced that they're teaming up with Thermaltake, G.Skill and a bunch of media partners to bring you the first ever worldwide Modmen PC modding competition.

There are two stages of the competition, with the first beginning online. The top 10 case modders will be determined from a combination of online votes and ECS' own modding judges. Whoever gets donned with the most votes, wins $1,000. From there, the top 5 PC modders qualifying for the second stage of the competition will be flown to Taiwan, put up in accommodation, and will compete at Computex 2013 for a chance of the Grand Prize - the NT$1 million, or USD$33,333. This is on top of the cash and prizes in between.

During the competition itself, the top five modders will show off their mods at ECS' booth, with a panel of accredited judges and the audience will determine the grand prize winner. Modders placed 6-10th place will also win prizes thanks to sponsors Thermaltake and G.Skill. Here's how the stages and prizes are broken down: 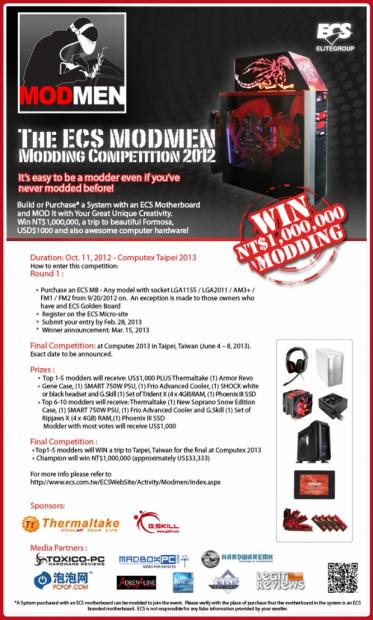 Additionally, the modder with most votes during the online voting stage will receive US$1,000.

You can be sure that we'll cover this at Computex 2013.