MegaUpload may be gone, but it is coming back and it'll be coming back better than ever. Call of Duty pro-gamer and all-round cool guy, Kim Dotcom, has stated on his Twitter page that "Operation Mega Debut" is coming. 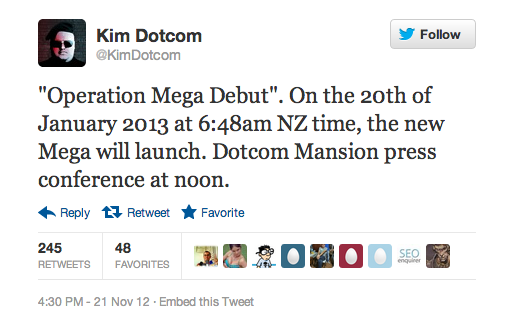 Operation Mega Debut will happen on the 20th of January, 2013 at 6:48am NZ time - on this precise moment, Mega will launch. A few hours later, the Dotcom Mansion press conference will take place, at noon.

I do enjoy the flavor that Dotcom injects into the world, he has something about him that makes me like him. 6:48am NZ time is a very specific moment, and I'm looking forward to seeing what Mega will do to the world of file sharing and court room battles. Hopefully there's no raid on the mansion this time.