Apple may brag their quarterly results, but you should know how I feel about that - our various editorials and news stories on their fall from grace (which won't stop for quite a while) is happening right before our eyes, and the true king is rising - Android. 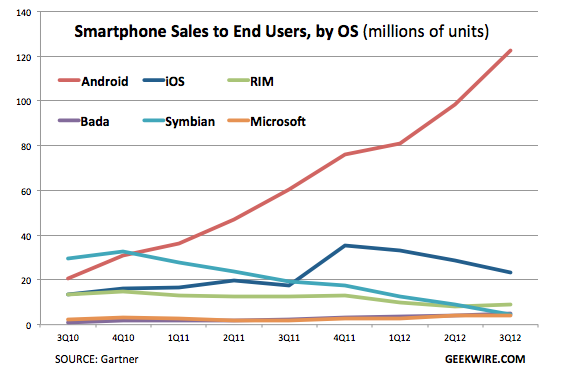 Q3 2012 numbers are in from Gartner, showing that mobile phone makers sold more than 122 million Android-based smartphones in the quarter, compared to just 24 million iPhones and just 4 million Windows Phone-based handsets. Windows Phones crappy performance can be attributed to consumers waiting for Windows Phone 8 - but overall, they're not even comparing to Android right now.

GeekWire have been great, compiling Gartner's stats for the past two years into the chart shown above. As you can see, Android has really been smashing it for a homerun in the last six months, shipping some 60 million units, compared to iPhone shipments which have dropped.