If Apple is to be believed, the new iPad is a mere 0.37mm thick, a claim that not even the most Apple-crazed fan could believe. To put that number in perspective, let's take a look at some other things that are roughly that thick. It's about the same as mechanical pencil lead, or four human hairs stacked together. 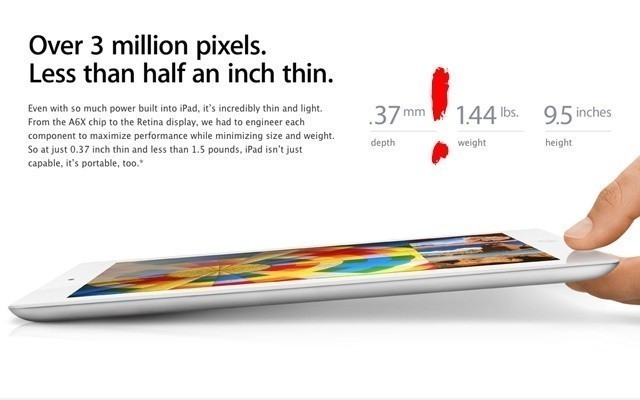 It's a typo, that's for sure, and a funny one at that. Apple is usually a perfectionist company, a company that would never stand for such an obvious mistake. Of course, the correct size, .37 inch, is stated in the accompanying text and official spec page. I'm just wondering if anyone will get fired over this.

Apple seems to be on a downhill trend as of late. Stock price is tumbling, typos are popping up, and products just don't seem to have the same pizazz. Typos such as this are a personal favorite of mine, so if you know of any or find any, please let me know!