Amazon has started the tablet wars. On their homepage, you will see the ad, pictured below, which compares the Kindle Fire HD to the newly released iPad min. Sure, they pick on a few features where the iPad mini is weak, but what is even more interesting is the quote they picked up from Gizmodo. Take a look for yourself: 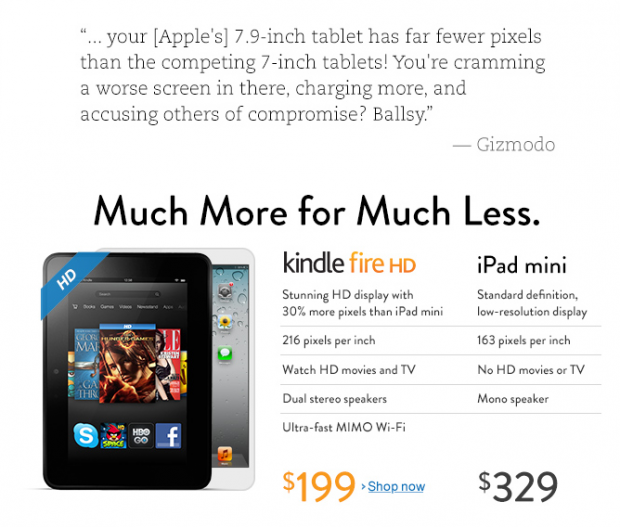 Pretty funny, right? Everything about that ad is factual. The Kindle Fire HD does feature a higher resolution screen and pixel-per-inch count. It also picks on the iPad mini for not featuring stereo speakers, though I imagine most people use headphones when watching a move or listening to music as the built-in speakers of most mobile devices are pitiful.

I had to laugh at the quote Amazon pulled from Gizmodo: "...Your 7.9-inch tablet has far fewer pixels than the competing 7-inch tablets! You're cramming a worse screen in there, charging more and accusing others of compromise? Ballsy." However, what Amazon is forgetting to compare is the "cool factor" of the iPad mini, something that famous UK judge noted about the original iPad.

However, they have a point, and Apple missed the mark with the new iPad mini in a lot of respects. What are your thoughts on the ad? Simple smear campaign or legitimate ad?