TSMC have something to be happy about right now, posting a record third quarter profit. The company posted a net profit of 49.3 billion New Taiwan dollars ($1.69 billion), which is a 62% jump year-over-year, and beating over 24 analysts' expectations. 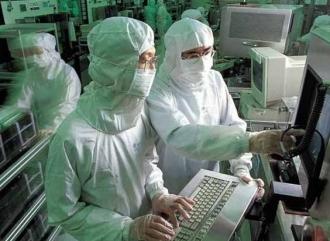 TSMC-powered smartphones and tablet demand continue to expand, even in an economy which isn't doing so well. TSMC's flagship 28nm technology has given them an advantage over the competition, and the company has said that is directly responsible for doubling chip shipments in Q3. TSMC have said that chips built on the 28nm process accounted for 13% of total wafer revenue.

Morris Chang, TMSC Chairman, says that the future will be a little dull, expecting revenue to fall in the final three months of 2012. Chipmakers like Intel are scaling their productions back in the fourth quarter, citing reduced demand. Even with Q4 not looking so good, TSMC are optimistic about 2013 and the future, where Chang believes that TSMC will continue to outgrow the semiconductor industry in the coming years, as they has positioned themselves well in the smart device markets.

The company is set to transition to 16nm technology next year, where they plan to have trial production by the end of 2013. TSMC are working with SK Hynix and Micron in order to develop three-dimensional chip packaging technology, if that sounds familiar, you're right - it sounds close to Intel's tri-gate technology that the chipmaker baked into Ivy Bridge processors.