Accidental clicks are a big problem for advertisers as they have to pay for a click that yields them nothing. It's a problem that people have been dealing with since the introduction of mobile advertising. The general thought is the smaller the screen, the more likely you are to accidentally click that tantalizing banner ad. 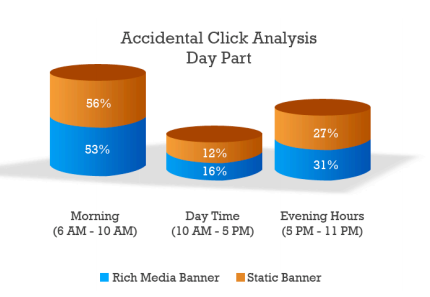 But is that the only factor? Probably not. How often are you surfing Facebook while driving? You might accidentally click on an ad then, not due to the small screen, but due to you being distracted with driving. GoldSpot is a mobile ad network that has taken a look into the problem of accidental clicks and they have a bit of insight to offer.

They figure that roughly four in 10 clicks on conventional banner ads are accidental. For rich media ads, the number drops to 13 percent, probably due to them being more noticeable as an ad. GoldSpot also believes accidental clicks are more likely to happen in the morning or evening, as you can see in the chart above.

No, I don't think our fingers are fatter in the morning. I figure it's because we're distracted by getting ready, driving, or possibly can't see the screen because we are just waking up. Of course, during the day and fully awake, the accidental clicks drop way off. They pick back up in the evening as people are possibly going to bed or driving home.